The picture that I have always held in my mind of what it means to spend time with family is one around the dinner table. I grew up in a family with two sisters and my parents. We were all very busy with our various activities: gardening, dance lessons, gymnastics, work, etc. but when 6pm rolled around, each and every day, you would find us all at the dinner table, even if it was for a mere five minutes. My parents would continually state that “a family that eats together stays together”. 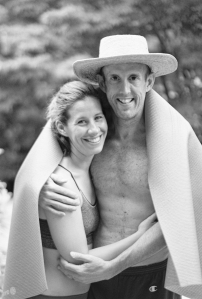 And then, I married a tri-athlete. At first, I was bothered by the fact that many days, dinner would consist of a power bar and electrolyte replenishment drink in between running and swimming. I would make plans to cook and it might be 9 pm before we would find time to sit down together at the table. I wondered how this would play out once we have kids. I was concerned. But the reality is that today’s modern family just might not be engineered to maintain the formality of sitting down at the dinner table each and every day. In the mean-time, my husband was on a quest to find a way for us to work out together. I don’t run, swim or bike nearly as fast as he does, so this was not an easy task despite his patience and determination.  But for Brooks, this would be a critical way for us to spend quality family time together. And it was clear that he was on to something.

Back in March, I asked Brooks to join me at a Bikram class. All it took was one class and he was hooked.  He started to read my Bikram books and we began to have in-depth conversations about certain postures. Sometimes, our conversations involve demonstrating the alignment of a pose right in the middle of the living room. We now take class together 3 times a week. Brooks feels that since he has started taking Bikram, he is much more injury proof, which allows him to be more consistent in his racing. Most importantly, practicing Bikram has given us family time together. I stopped worrying so much about sitting down together at the dinner table because we found that we can bond equally as well just by balancing on one leg! I am pretty sure that when Brooks and I do have kids, they will make fun of me and say “Yeah yeah, Mom, I know, a family that practices Bikram together stays together!” 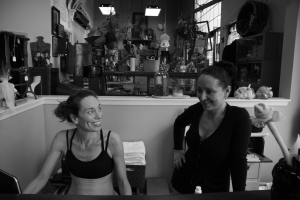 Megan van Riet and Heather Dunghe, co-owners of Bikram Yoga Chadds Ford both practice daily and often, you will see both of their husbands, Erik and Doug in the studio as well. Megan and Heather are very proud of the community they have built and are thrilled to see how we are all growing into one big happy yoga family. Within our group, there are many other families that practice together: sisters, brothers, husbands and wives, mothers and daughters. I caught up with a couple of our yoga families to hear how practicing Bikram together affects their family life.

Charlotte started practicing Bikram yoga when the studio first opened in February of this year. She heard about it through a patient and decided she would give it a go. The first day she felt overwhelmed by the sheer amount of information that the teacher was stating during class. But she was intrigued by the practice, particularly the breathing and decided to buy Bikram’s book and keep coming back. It wasn’t long before she fell in love with the practice and became one of our regulars. Sometime in March, her husband Denny and her daughter Lindsey took note and decided to join her. They recognized how much Charlotte loved the practice and wondered what it could do for them.  Charlotte lost 16-17 pounds, dropped her cholesterol from 206 to 172 and is feeling great. She loves that they now practice as a family. Charlotte and Denny are in there late 50s and feel the best part of practicing together is that that they don’t have to worry and can feel good about each other’s health.

Kathy heard about Bikram Yoga Chadds Ford through Barry Hooper, our local ART massage therapist extraordinaire. (Barry works out of our studio one day a week: www.getbodywork.com ) She had been in a biking accident and was suffering with herniated disks.  She told her daughter Dana she was going to give it a try, so Dana figured since she had done yoga in the past, why not join in? Without having researched Bikram yoga in much depth, Dana was a bit shocked by the heat of her first class, but she liked it just the same.  Kathy’s recovery has been slow but consistent and finds that the yoga is different every day. She would know about maintaining a daily practice because she just completed a 60-day challenge on the Fourth of July! Daughter Dana joined her for the last 30 days of the challenge as well! Kathy and Dana have always been close and spend time together, so it was natural for them to practice together. They are now on a quest to get Kathy’s husband and sons and Dana’s boyfriend into the studio as well!

Bikram yoga is for everyone. Bikram Yoga was designed for beginners of all fitness levels. Regardless of your age, culture or physical condition, you will fit right in. As Megan van Riet says, “Establish a regular practice and–before you know it–you’ll have a huge extended yoga family. Complete with lovable and eccentric characters, just like your family of origin. Make sure you practice today, if you haven’t already. Your Bikram family misses you.”