Posted on July 31, 2015 by janecespuglioclark

“Tony Sanchez trained with Bikram Choudhury from 1976 until 1980, when he was certified by Ghosh’s College of Physical Education. He was director of Bikram’s San Francisco Yoga College of India from 1980 to 1984. In 1985, Tony founded the United States Yoga Association and the San Francisco Yoga Studio. He created the Yoga Challenge system of four progressive series, enabling practitioners of all levels to reap the health and fitness benefits of the 84 asanas of the Ghosh lineage. Tony holds the 1994 (Argentina) and 1996 (Brazil) World Cup Yoga Sport title from the International Yoga Federation, based in India and Argentina. He participated to support their efforts to qualify hatha yoga as an Olympic exhibition sport. He was also hoping to motivate more men to practice. In 1996 Tony and Sandy Wong-Sanchez developed the Yoga Science Box, a multi-disciplined curriculum program for the San Francisco Unified School District (SFUSD). The curriculum includes “Desk Potato Yoga” and “Yogasthma: Seven steps to asthma control”. From 1996 to 2004, Tony trained elementary grade classroom teachers, and middle and high school physical education teachers in the public and private sectors in San Francisco, Los Angeles and beyond. With volunteers from the US Yoga Association he established after-school programs in schools throughout the San Francisco. In 2005 Tony went on sabbatical in Baja California Sur, Mexico where he started the Yogic Physical Culture Academy. Tony and the academy are registered with the national sports institute of Mexico.” (Taken from Tony’s website: http://www.84yogis.com)

This past May, I went to study with Tony in Baja and get certified by the Yogic Physical Culture Academy. Tony has developed a new intermediate practice comprised of 40 of the 91 Ghosh postures, which was the basis of my training. The Core 40 system (originally called the “Master Core System”) includes all of the 26 asanas and two breathing exercises found in the Bikram beginner’s series but they are practiced in a different order in conjunction with 14 additional Ghosh postures as well as variations on these postures and two additional breathing exercises.

This class is considered to be an intermediate level practice but is really for anyone and everyone! Variations are offered on many postures to accommodate limitations as well as provide greater depth and challenge. The practice is a 90 minute class in 95 – 100 degree room.

The image below shows Tony Sanchez demonstrating the core 40 postures which are the basis of the class. The class can be varied in terms of the number of sets per asana and include an abdominal series and/or the ghosh mudras (asansas with breath coordination). 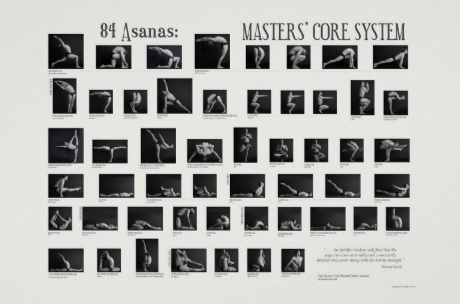 I have started to offer this class as part of the yoga lab series. (Keep your eye open for the schedule or check the black board!)

This class is a great way to expand and deepen your Bikram practice. Everyone is welcome to try this class but it is helpful to have practiced the Bikram Beginners series for at least 3 months as a basis for this practice.

I look forward to sharing this new practice with you, it is a great work out and lots of fun!

← A sequence to nourish your knees
Simple, Affordable Pricing: Yoga for Everyone →