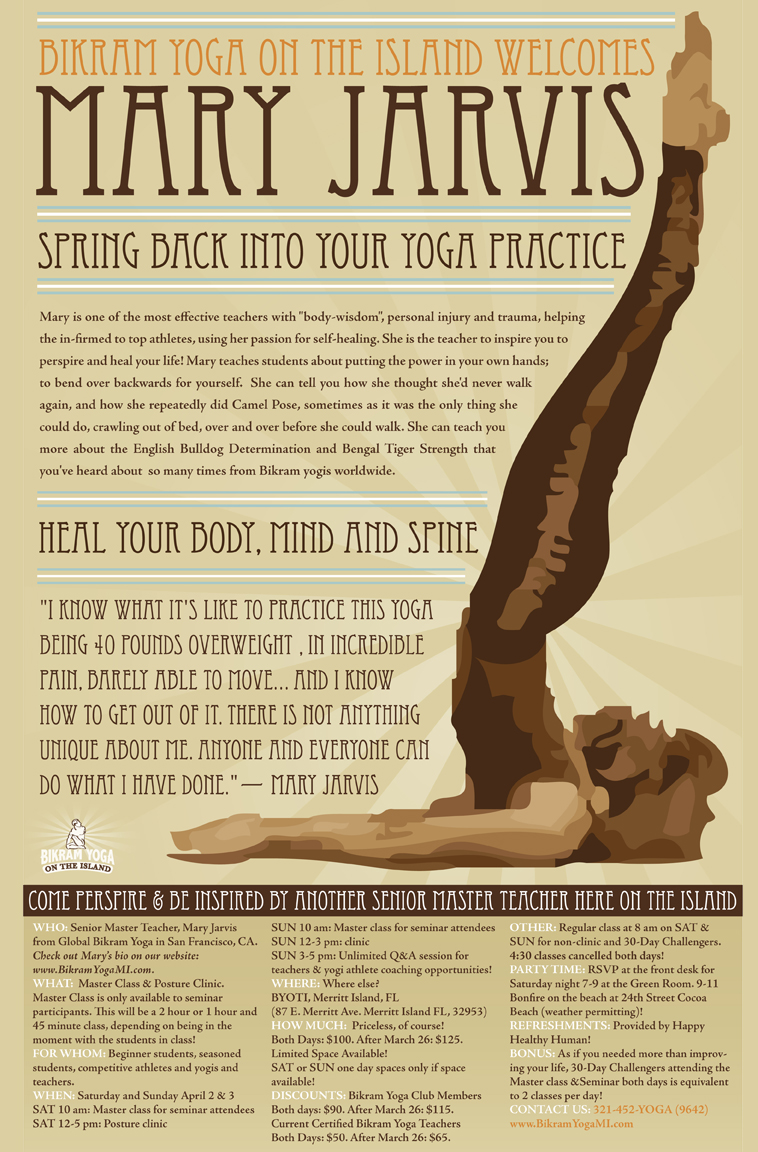 Just for kicks, here is an interview with world-renowned teacher Mary Jarvis. On one of her favorite subjects: Discipline.  Mary will be in Pittsburgh for the Asana Competition in January 2012. A road trip might be in order…

We used to cut open large black garbage bags and put them under our towels to try and keep the sweat off the rug….which was a failure, by the way. When you stepped out into a triangle you would slide or surf on the carpet. We did use baby crib liner mats for awhile….still not very long but no surfing.

I bought yoga mats for my school in 1996 and it was a big deal . We could choose dark ugly blue or dark ugly green for colors. They were NOT to be used for a prop. It was only to keep the sweat off the carpet. I still hold true to that even today.
When taking class….YOU DID NOT MOVE !

Hold still in the posture….

Hold still NOT in the posture.

If you moved around in class,Bikram would kick you out. He wouldn’t even tell you why.

It happened to me once.

So I left in shock, not knowing what I did and bummed because that yoga made me feel so good.

Bikram looked at me and said,”WHERE HAVE YOU BEEN?”

“Only for THAT DAY!” “Don’t ever leave again”

So I kept my eyes way wide open when I took class after that …I was looking for anything that would indicate getting kicked out.

And then it happened….a girl in front of me wiped her face after a Triangle Set.

AH HAHH! SHE MOVED!…..you cannot move in class!…that must have been what I did.

Don’t move in class….Good to know.

I was standing still after a posture one time and bug flew up my nose. I did not go after it. I was not going to move. He was dead by that time anyway and All Bugs are Edible! Pure protein…number one survival rule (besides pee on a cut or gash).

The discipline in the Yoga Room was amazing. The energy was so high. The concentration and focus of the students…I do not even have a good English word to describe it.

I sometimes get nostalgic for those years. I miss those yoga classes…

If you come to my school,you will see very few water bottles in the room. Most of the time, the people who have them are Drop-In students from other schools or new students who read somewhere that they should bring water.

I admit that I have a couple of regular practicing students that drink in class. It is a little embarassing to me that they do. I am NOT going to yell at them or anyone for that matter…I just take note of who does and who doesn’t. I do not like it ,though!

None of my teachers are ever allowed to drink water while taking or teaching class. Somebody has to hold the high vision! I love it when visiting teachers come to my school…it’s our Yoga Family. They can come for free but they may not drink water or use hand towels in class and they have to stand in the last back row of the yoga room and learn humility. 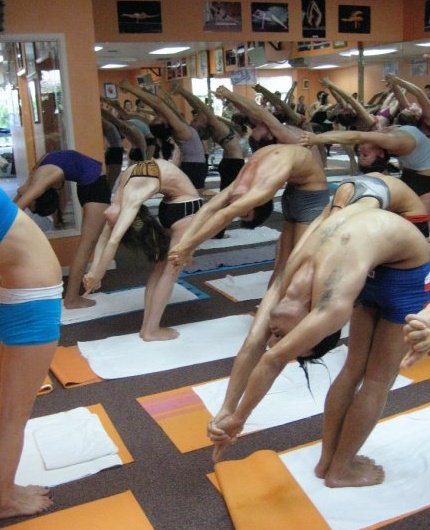 Mary’s students have beautiful backbends, but they don’t have water.

← Heal your body and get in the best shape of your life
Yogis, meet your new home! →

#fallenangel
Your energy is precious. Pay attention to how you use it! #therapeuticdiscomfort @chalise_theyogateacher