This month, we are discussing The Life Changing Magic of Tidying Up

Join us at 6:30, in the BYCF lobby. Bring a snack or dish to share, if you are able. (Please no alcoholic beverages.)

We would love to see you…and hear what you have to say.

Free and open to all.

By her own account, Marie Kondo was an unusual child, poring over lifestyle magazines to glean organizing techniques and then stealthily practicing them at home and school, confounding her family and bemusing her teachers.

As she writes in “The Life-Changing Magic of Tidying Up: The Japanese Art of Decluttering and Organizing,” which comes out this month in the United States and is already a best seller in her native Japan and in Europe, she habitually sneaked into her siblings’ rooms to throw away their unused toys and clothes and ducked out of recess to organize her classroom’s bookshelves and mop closet, grumbling about poor storage methodologies and pining for an S-hook.

Now 30, Ms. Kondo is a celebrity of sorts at home, the subject of a TV movie, with a three-month waiting list for her decluttering services — until recently, that is, because she has stopped taking clients to focus on training others in her methods. Last Friday, I brought her book home to practice them.

What better moment to drill down and ponder the fretful contents of one’s sock drawer? Global and national news was careering from the merely hysterical to the nonsensical (the Ebola cruise ship incident was just peaking). Closer to home, other anxieties beckoned. But in my apartment on Second Avenue, the world was no larger than my closet, and I was talking to my T-shirts.

Let me explain. Ms. Kondo’s decluttering theories are unique, and can be reduced to two basic tenets: Discard everything that does not “spark joy,” after thanking the objects that are getting the heave-ho for their service; and do not buy organizing equipment — your home already has all the storage you need.

Obsessive, gently self-mocking and tender toward the life cycle of, say, a pair of socks, Ms. Kondo delivers her tidy manifesto like a kind of Zen nanny, both hortatory and animistic.

“Don’t just open up your closet and decide after a cursory glance that everything in it gives you a thrill,” she writes. “You must take each outfit in your hand.”

“Does it spark joy?” would seem to set the bar awfully high for a T-shirt or a pair of jeans, but it turns out to be a more efficacious sorting mechanism than the old saws: Is it out of style? Have you worn it in the last year? Does it still fit?

Alone in my bedroom, with the contents of both closets strewn over every surface, I fondled stretch velvet pants (don’t judge me) and enough fringed scarves to outfit an army of Stevie Nicks fans, and shed a tear or two for my younger self. (Where did the time go?) 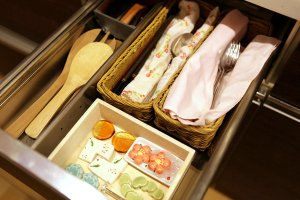 “Sparking joy,” I realized, can be a flexible concept: That which is itchy, or too hot, is certainly joyless. So is anything baggy, droopy or with a flared leg.

Tidying is a dialogue with oneself, Ms. Kondo writes.

Of course, after 10 or 12 hours of this, you get a bit silly. You forget to thank your discards. (Country music can help. Try George Jones and Lucinda Williams.) By 9 p.m., I had lost Ms. Kondo’s book in the layers of clothing, hangers and shoe boxes. And my glasses, too.

How to distinguish one black turtleneck from another? Why would anyone buy purple tights? What is joy, anyway?

At 1 a.m., my daughter appeared, raised an eyebrow at the piles still obliterating my bed and offered up her own. But I was ready to fold, the primal act of Ms. Kondo’s method.

You can find YouTube videos of her technique, but it’s not so hard: Fold everything into a long rectangle, then fold that in upon itself to make a smaller rectangle, and then roll that up into a tube, like a sushi roll. Set these upright in your drawers. And pour your heart into it, Ms. Kondo urges: Thank your stuff, it’s been working hard for you. 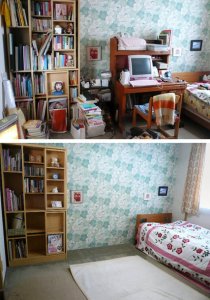 Tidying, Marie Kondo says, is a dialogue with one’s self. Right, a client’s bedroom, before and after her ministrations.
“When we take our clothes in our hands and fold them neatly,” she writes, “we are, I believe, transmitting energy, which has a positive effect on our clothes.”

She proposes a similarly agreeable technique for hanging clothing. Hang up anything that looks happier hung up, and arrange like with like, working from left to right, with dark, heavy clothing on the left: “Clothes, like people, can relax more freely when in the company of others who are very similar in type, and therefore organizing them by category helps them feel more comfortable and secure.”

Such anthropomorphism and nondualism, so familiar in Japanese culture, as Leonard Koren, a design theorist who has written extensively on Japanese aesthetics, told me recently, was an epiphany to this Westerner. In Japan, a hyper-awareness, even reverence, for objects is a rational response to geography, said Mr. Koren, who spent 10 years there and is the author of “Wabi-Sabi for Artists, Designers, Poets & Philosophers.”

“Think of the kimono, and the tradition of folding,” he said. “There is also the furoshiki, which is basically a square of flat cloth used daily to wrap packages. Folding is deep and pervasive in Japanese culture. Folding is a key strategy of modular systems that have evolved because of limited living space.”

He added: “More spiritually, the idea of non-dualism is a relationship to reality that proposes that everything is inextricably connected and alive, even inanimate objects. If we are compassionate and respectful to everything that exists, then we would have to be compassionate about the socks in the drawer that aren’t folded properly.”

Indeed, Ms. Kondo’s instructions regarding socks are eye-opening. Socks bust their chops for you, and if you ball them up, they don’t get a chance to rest. As she puts it, “The socks and stockings stored in your drawer are essentially on holiday.”