What’s the purpose of pain? 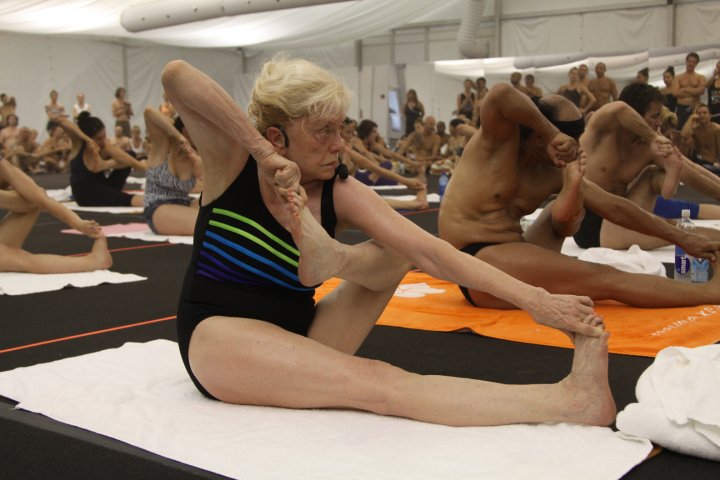 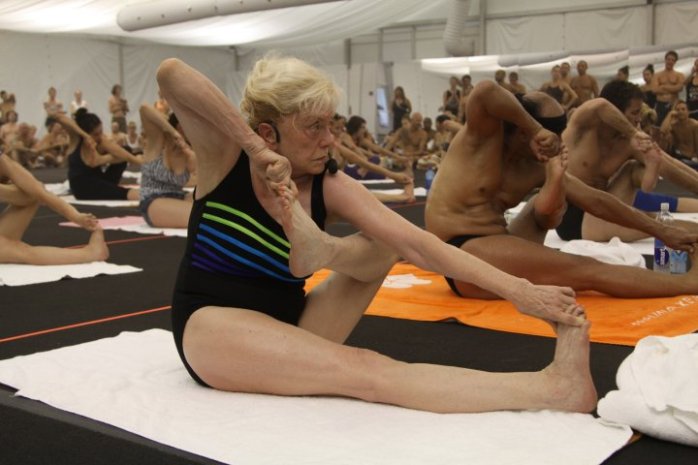 Emmy Cleaves is an amazing woman.  She is the Principal of the Bikram Yoga College of India, she leads the advanced class at headquarters three times a week and her lecture on pain is one of the most memorable at teacher training.  Did we mention she’s in her mid-8o’s?  Listen up, she knows what she’s talking about!

Emmy talks about the gift of pain – without it we would destroy ourselves.  Think about it.  Pain is the message that something in the body is off (could be as extreme as your hand on a hot stove or as small as a splinter stuck in your finger).  If we ignored it, it could possibly turn into a much bigger problem (think about what would happen if you never took your hand off that hot stove)!
There is another level to pain, which is the pain that we reference in class.  Ever hear the instructor to tell you that your back is supposed to hurt?  Or that your elbows are supposed to hurt?  Our how about telling you to make sure your back hurts?  When we start improving and changing the body, there is a lot of sensation that goes on with that.  When the mind first experiences this, it often freaks out and reacts as if the body was on a hot stove as opposed to just getting a good stretch.  This is normal!  Think about the reaction your body probably had the first time you tried Camel pose.  Pretty dramatic, right?  The trick is to go slowly and breathe and slowly teach our body that it is not experiencing the agony of stretching, but the luxury of release!
This is especially important when dealing with injury.  It’s important to bring the body into the room to facilitate healing.  Heat + breath = increased circulation = faster healing time.  If you want to alleviate the pain from your bulging disc, come into the room.  If you want to get rid of the frozen shoulder, bring it in.  If you want to get your body in a better place for your next road race, do some yoga.  As you move through the series, the trick is to start to recognize what kind of pain you are dealing with.  The kind of pain that is telling you to stop?  Or the kind of pain that is experiencing something it hasn’t before?  You will learn this over time with consistent practice.  Go slowly.  Be mindful.  Practice yoga.  As Emmy says, “yoga without mindfulness is just calisthenics.”
Written by Audrey Holst and Diane Ducharme Gardner

More about Emmy:
Emmy Cleaves took her first yoga class in 1950 from a Hindu in Beverly Hills, California. As a young war refugee from Latvia, her trajectory to that tiny locale had been at least as unlikely as his. So when she later studied under another Hindu, Bikram Chouhdury, the universality of the teachings remained clear to her. “There’s only one kind of yoga,” she says. “There are just different paths to it because we are such a myriad of people. We are all God’s experiment of one.”

Emmy was a young girl when she and her mother fled their hometown of Riga, Latvia, during the Stalinist army’s second advance on the tiny country during the second world war.When the Eastern front advanced on Danzig, the camp disintegrated and Emmy separated from her mother, was shipped off to Denmark, then back to Germany, and finally to the United States. She learned the language and eventually moved to California. Emmy was a successful businesswoman in Los Angeles by the time she attended that first yoga class. She had been pestering her jazz dance teacher for more of the slow stretching exercises he taught as warm-ups; he told her to do yoga—the first time she heard the word. “I became completely fascinated with the subject,” she says. For her, as for most practioners, the initial attraction was physical. “But when I started learning the philosophy, it seemed like yes, that’s exactly it; that’s the truth,” she recalls,”the ethics and morality that my mother had taught me. I had always sensed that we’re not just a quantum mechanical body, that we’re multidimensional beings, and that the body is just a denser form of the many interactive energy fields. So it resonated completely with my state of mind.”

Emmy began reading books and practicing on her own. For the next two decades she sampled the relatively limited smorgasbord of yoga offerings then available in Los Angeles. “I would try a class here and there, but I was never impelled to stay because internally I never connected with anyone,” she says. The teacher has to resonate on some other level than just ‘Put your legs here’ and ‘do this’ and ‘stretch that.’”

Then at thirty five, Emmy almost died from a brain hemorrhage, which is how her father died in Latvia. The experience changed her forever. “A life threatening event like that makes you wonder what the purpose is of your survival. Why are you alive? Why didn’t you die? Emmy’s search for answers created cataclysmic upheavals in her life. She gave up being a businesswoman, divorced her first husband and began exploring meditation and yoga more seriously.

In 1973 Emmy attended a demonstration by a 26 year old yogi by the name of Bikram Choudhury. “His group consisted of maybe ten people—all ages and shapes, including a couple of kids. I was fascinated by the energy and precision of his demonstration.” At the end of the presentation Bikram jumped off the stage, walked across the room, and stuck a card in her hand. “Tommorrow.You come my school,” he said. She did.

As chance had it, in the preceding weeks Emmy had been reading Autobiography of a Yogi by Paramanhansa Yogananda, whose brother Bishnu Ghosh had been Bikram’s guru throughout his childhood in Calcutta. Ghosh, a master of yoga’s physical practices, trained young Bikram to compete in the National India Yoga Competition, which Bikram won at the age of eleven and for next three years. At Ghosh’s behest Bikram set off for the West, eventually ending up in Beverly Hills where he began reteaching Emmy Cleaves everything she had ever learned.

“We argued. We really argued,” Emmy says.“I had done yoga for a long time, none of it the way he demanded it be done.” Bikram’s methodology involves a basic series twenty six poses practiced in a 42C studio. His studio and teaching methods were different from Emmy had previously learned.“I would go into a Cobra pose doing everything right,” Emmy says, “ and he would say, ‘No, that’s not the way.The posture’s not the object; your body is the object.’I began getting very frustrated.And that heat!I said, ‘Bikram, if you’d turn down the stupid heat this room would be much more full.’He said, ‘An empty barn is better than a barn full of naughty cows.”

Emmy had had enough. It was upsetting my whole equilibrium,” she says. Her friend Barbara Brown, a pioneer in the development of biofeedback, was taking a trip to India to tour research centers and Emmy joined her. Among the facilities she visited she found yoga being used to treat medical conditions like diabetes and asthma. “Lo and behold, they did the postures Bikram’s way,” Emmy says.“I visited three of four other research centers that did the poses his way as well, with the same energy and same demand for precision.”

So Emmy went back to Beverly Hills and immersed herself in Bikram’s teachings and in the logic of his twenty-six-posture, ninety minute series. “The first time you do the twenty-six postures which cover a normal range of motion for just about anybody, they act as a diagnostic tool,” she explains. Even People with minimal body awareness are able to diagnose their own problem areas.Then with practice those same postures become therapeutic tools that reeducate yourbody and heightens the efficiency of its major systems.

Like any well chosen asana program, Bikarm Yoga is intended to tone the endocrine, lymphatic, and digestive systems, increase capillary blood flow and produce a strong, limber and comfortable musculoskeletal system.To attain the benefits of this series, though, the sequence of the postures is paramount which is why Emmy defends Bikram’s decision to copyright his method.

The efficacy of Bikram Yoga is made continually apparent to Emmy through the many therapeutic “miracles” she has witnessed in the thirty years she has taught it. What gives me such pleasure is that I am able to share this valuable thing, which has so much potential to better people’s lives and to heal whatever is not working for them,” Emmy says.“That is the ultimate accomplishment of my life and will be to the end of it.”