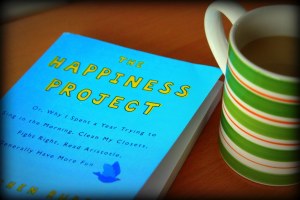 We are reading The Happiness Project by Gretchen Rubin. Come hang and talk, whether you have read the book or not. Free of charge and open to all.

A good time is guaranteed, especially if you take Corrinne’s 4:30 class first…

Here’s what the New York Times had to say about The Happiness Project:

HERE we are, already at the end of February. It’s been weeks since our scant New Year’s resolutions fell under the bed, joining the resolution dust bunnies of yesteryear.

The book that started it all, by a woman who would seem to have it all.

Not so for Gretchen Rubin. Her gleaming home has no dust bunnies, real or metaphorical. She is on target with her resolutions. All 92 of them.

“There are more, actually,” Ms. Rubin said, thumbing through a dozen sheets. “But the way I set up my charts, I can only fit eight on a page.”

Ms. Rubin is the author of “The Happiness Project,” an account of her yearlong effort, tracked with a fresh chart each month, to amplify her happiness quotient. The book began dancing gleefully on the New York Times self-help best-seller list almost within minutes of its being published on Jan. 1.

What makes the author, 44, happy these days? “Hitting No. 1 on the list!” she said without hesitation.

Ms. Rubin is a very confident, unabashed former lawyer who once clerked for Supreme Court Justice Sandra Day O’Connor. Yet she writes in the book that she still craves applause, which she calls a “gold star.”

She sipped a Diet Coke in the library of her Manhattan triplex, a gas fire glowing in the fireplace. “The ultimate professional gold star!” Ms. Rubin said of the No. 1 ranking (the book has since slipped to No. 4). “When I found out, I was on my book tour in Seattle. So I tried to remember to process my own project: ‘Enjoy the moment. Notice what’s happening. Feel grateful.’ ”

For as long as happiness has been a warm puppy, the word has been a perennial of self-help epigrams and book titles. In these anxious times, it’s almost a must-have. (See “The Nine Rooms of Happiness,” by Lucy Danziger and Catherine Birndorf; “Bluebird: Women and the New Psychology of Happiness,” by Ariel Gore; “Stumbling on Happiness,” by Daniel Gilbert; “Awakening Joy: 10 Steps That Will Put You on the Road to Real Happiness,” by Shoshana Alexander and James Baraz. And even, bless him, Eric G. Wilson’s “Against Happiness.” The spring book lists are teeming with beaming.)

With so much product out there — centuries of it, actually — what accounts for the lightning-strike success of Ms. Rubin’s book?

“I wonder if the key word is ‘project,’ ” mused David LeMaire, who buys self-help titles for Borders Books. “It gives people structure.”

And boy, does Ms. Rubin offer structure. In 2006, recognizing that even though she was relatively content — good marriage to a private equities trader; two young daughters; nearby in-laws, Judy and Bob, with whom she had a warm relationship — Ms. Rubin decided she wanted to be happier. Hers was a mild case of malaise, a below-the-surface restive irritableness.

With an intellectual curiosity accustomed to drilling deep and wide — Yale undergraduate, editor in chief of The Yale Law Journal — she headed for the library. She studied up on happiness studies by the founding fathers and mothers of the positive-psychology movement. She read Boethius, Schopenhauer, St. Thérèse of Lisieux. Tolstoy. Back issues of Psychology Today.

Then she plotted her course. Each month she chose a theme, like “energy,” “love,” “work,” and test-drove happiness theories. She drafted resolutions, Splendid Truths and 12 Commandments (No. 1: Be Gretchen). She kept a food diary. A one-sentence daily journal. A blog, of course. And those charts, which she ticked off daily.

Amid the salt spray of erudition, most of her insights turn out to be of the palm-smacking-forehead order. “The No. 1 resolution I keep getting feedback on,” she said, “is ‘Make your bed.’ ” Manageable, she said. First order of the day, getting your life together.

“This is about ordinary happiness,” she added. “I wanted to change my life without making major changes. I wanted to show that you don’t have to do something radical.”

Wait a minute. Didn’t Ms. Rubin already have extra servings of happiness, of the ordinary kind — a close-knit family, wealth, health, bountiful success as a lawyer and writer?

A good legal brief anticipates counter-arguments, and in her book Ms. Rubin quotes friends and relatives who raised eyebrows at her quest.

“I wanted to appreciate more what I already have,” she explained. By year’s end, she writes in the book, she learned to nag less and hug more. She got more sleep. She started a collection: bluebirds. Reader, she sings in the morning.

The book is chock-full of tips and action plans, both generic and idiosyncratic. “I don’t have anything that’s really original,” Ms. Rubin acknowledged, “though I do think I had a few original ideas, which was very exciting to me.” The insight she quotes most often: “The days are long, but the years are short.”

On a tour of her museum-immaculate home, Ms. Rubin, a slender strawberry blonde whose cheerfulness seems both hard-wired and hard-earned, comes across as a wonky Martha Stewart. “I get such a buzz out of cleaning closets,” she said, pointing out the pretty, practical glass jars that hold her daughters’ small toys, a Container Store contraption that deftly organizes earrings, even a few shelves that remain proudly, temptingly empty. The extensive library is organized by genre, by subcategories of special topics, and alphabetized by author throughout.

“Growing up in Kansas City,” she said, “I was always neat, the teacher’s pet, know-it-all type.”

She paused in front of her closet, the uncluttering of which is described at length in her book. To the untrained eye, it seemed staidly perfect. But she wrinkled her nose and sighed.

“My husband is neat, too,” she said. “He’ll say, ‘Let’s take 20 minutes and tidy up.’ We’re both pathologically prompt and that leads to harmony for us.”

In her book, Ms. Rubin’s husband, Jamie, plays the role of the long-suffering good sport. She discloses intimate details such as his hepatitis C, but doesn’t mention that he is a senior partner at BC Partners, a hedge fund. Nor does she mention that her father-in-law, known to readers as the sage, affable “Bob,” is known to the world as Robert Rubin, the former Treasury secretary, who stepped down last year as an adviser to Citigroup.

Ms. Rubin flicks away the suggestion that the just-us-folks tone of the book may be a tad disingenuous. “Bob is important to me because he’s my father-in-law, so that’s the way he’s relevant in the book,” she said. “I wasn’t trying to hide it. It just didn’t come up naturally.”

Readers may not realize that she doesn’t live on the generic row of low-rise apartment houses on the cover of the book, suggesting the West Village or Park Slope in Brooklyn. Her triplex is in a neo-Georgian building on the Upper East Side.

And to those who may feel daunted by how she does it all — the charts, the reading, writing, exercising, volunteering, socializing, parenting, scrapbooking and glue-gunning? Relax. She has a sitter and a housecleaner.

In the book, Ms. Rubin acknowledges that her family has plenty of money to do what it wants. But happiness, she writes, comes from how people choose to spend their money.

This view is an earnest leap away from her first book, the biting “Power Money Fame Sex: A User’s Guide.” Since then, she said, her values have become “more transcendant.” She began to research that book, which includes copious tips on self-promotion, while still a clerk for Justice O’Connor. She had by then decided that, despite her having achieved one of the most competitive spots in the legal profession, the law did not engage her.

She still keeps in touch with Justice O’Connor. who retired in 2006. “I asked her what she thought it took to have a happy life,” Ms. Rubin said. “And she replied, ‘Work worth doing.’ ”

Writing a self-help book with epigrams and advice embraced by thousands is, in Ms. Rubin’s view, certainly work worth doing. She has created her own cottage industry devoted to happiness (and to promoting book sales): the blog, an interactive companion site with a happiness project tool box, a monthly newsletter, weekly resolutions and tips, videos. There is also a starter kit for groups wishing to tackle her project.

Following her advice can take more work than fans bargain for. Diane Owens’s happiness project group meets in the public library of Mount Pleasant, S.C. — 13 members, all women, most widowed or divorced. “At the ‘love’ chapter, people said, ‘This isn’t a good subject for me,’ ” Ms. Owens said. When she asked who had started a resolutions chart, only two members raised their hands.

But Ms. Owens said the book inspired her: “I filed three 30-gallon plastic tubs filled with five years of paperwork. I’m thrilled. If I do nothing else, I’m still way ahead.”

According to Ms. Rubin, thousands of readers have requested a copy of her own personal resolutions chart.

It is a thing to behold, filled with tidy checks and X’s. By now she has incorporated each month’s resolutions into a seamless whole.

No scorekeeping, no calculation.

One resolution still gives her trouble. “Take time to wander,” she said. “It’s hard not to check off things on my list.”

← What are we DOING? WHY? Rajashree answers.
Effort & Ease →

{practice all is coming}
{storm watch}