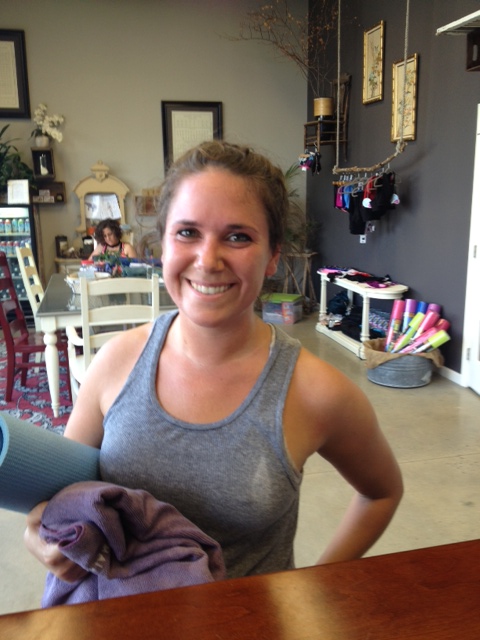 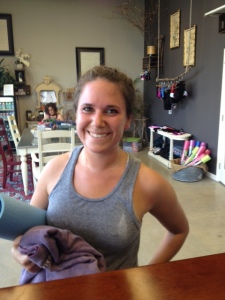 Bikram yoga came into my life–and town–about six or seven years ago. I was in my early twienties-ish and something about that hot room and those 26 postures caught my attention. I practiced sporadically, sometimes twice a week and sometimes once a month. The studio eventually morphed from a Bikram yoga studio into a ‘regular’ yoga studio, and I stopped going. My life continued on. I owned and operated my own small business doing what I loved. I made enough money to very comfortably pay my bills and then some, and I fully enjoyed living a bustling and social urban life.

Last year I decided to act on my craving for a big change in my life. After six months of planning and with zero hesitation or glance backwards, I moved home. Out of a city two hours away and back to the suburb where I was raised. Out of my fabulous, penthouse, rent-controlled apartment, and back in with my mother in my childhood home. Leaving the business I had owned for five years and been employed at for seven in the hands of a manager. I turned 29, moved, and one month later opened a second location of my business. I was full of enthusiasm and excitement and momentum. And then the panic set in.

My first five months in business I spent most of my time being terrified. What if I never made any money, how would I pay off my debts? What else was I even qualified to do? What if I shouldn’t have ended my long-distance, but loving and supportive, relationship? What if I thought I wanted this huge change, but really I secretly now had second thoughts? What if I failed?

I have enjoyed having a naturally optimistic temperament throughout my life. But suddenly ever aspect of my life felt bleak. My reality was an existence that I no longer recognized. I alternated between feeling anxious and depressed, both uncharted territory for me. My list of worries grew. My long hair fell out by the handful.

Then BYCF opened. I bought an intro pass and came eight consecutive days. I was struggling to breathe in my life, but in all of the heat and humidity, I had no choice but to breathe and focus. I dropped in once or twice more when Megan and Heather announced they were beginning a 30-day Challenge for anyone interested. Financially, I couldn’t really afford to commit to it. Mentally, I couldn’t really afford not to.

And so I began. I understood from the outset that, yes, I would be sore and tired, but that my body would be physically capable of this challenge. I would just have to keep my mind strong and tell myself to keep going. And I did. Even when I didn’t wan to. Even when I felt tired and off-balance. Even when my feet ached and I was dragging my body through the motions. Each class was a new opportunity to challenge myself, to grow, to start over. Each class something would change with me, in me, physically or mentally. Subtly, or in a huge way. Each teacher would make a correction or a comment that would stay with me well beyond the hot room.

“Don’t think, Devon! Just charge your body forward,” Megan called to me from the back of the room. And the craziest thing happened: I let go of the resistance I didn’t realize I was exerting. I charged my body forward, and I didn’t fall.

“Standing Bow-Pulling Pose. Put your hand out to the side and say, ‘Mama, give money!’,” the teachers would tell us to assure the proper grip. “Money in your hand, don’t drop the money!” For 30 consecutive days, I put my hand out to the side and chanted to myself, “Universe, give me money!” I stopped thinking, ‘what if my business fails?’ and started again planning for being successful.

My body learned to touch my forehead to the floor before my hands reached the floor in Half Tortoise pose. After about 20 days I could finally balance on one foot in Standing Head-To-Knee pose, my hot room nemesis. Two days later I could kick my foot out. Each new progression felt like a major achievement. Like proof that I could make things change.

“Keeping your hands together in this pose is the difference between riding a tricycle and a bicycle,” Chris Fluck said to us as we stood with our heads upside-down, our noses to our knees. Sweat dripped into my eyes and burned as I tried to blink it away. I slowly brought my palms together to touch. I was the one who wanted the training wheels to come off. I knew I was ready. It was time to ride.

One day I took back-to-back classes. Three hours of Bikram with a 30-minute break halfway through. And I loved the challenge. I did several doubles and always found the second class to be dramatically easier than the first. I realized that 95% of the reason why is that I would spend much of the first class preoccupied with the dread of immediately taking a second class. so I adjusted my attitude. Instead of thinking about three hours and 52 postures stretching out before me, I focused on one posture at a time. If I felt overwhelmed I would promise myself, “After this posture I can lay down.” I never laid down once. I proved to myself that I could do it. Whatever ‘it’ might mean. I met my own eyes in the mirror class after class and instead of feeling surprised when I accomplished something that felt daunting, I came to expect to accomplish the daunting.

In my head I could hear Chris Robin’s voice telling the class to relax in our final Savasana and to resist the urge to jump right up and leave the room. To stay put until we got past the point of feeling like we needed to flee. This resonated deeply with me and I relaxed in for the long haul.

In 30 days, Bikram yoga and BYCF helped me indescribably in the emotional battle of staying put until I passed the point of feeling like I needed to flee. I completed my 30-Day Challenge with a deep sense of pride and calm and belief in myself.

I picked up and moved my entire life exactly one year ago. I opened my business 11 months ago. I just celebrated my 30th birthday, happily relinquishing my twenties and eagerly beginning a new decade. I am still not quite breaking even at work. But I’m getting there and I no longer question that this will all work out. Because my throat is choked, but my eyes are open and I’m breathing normally.